A Series of Random Act of Courage Essay

A Series of Random Acts of Courage

The Work of John Dickson and Genna Watson 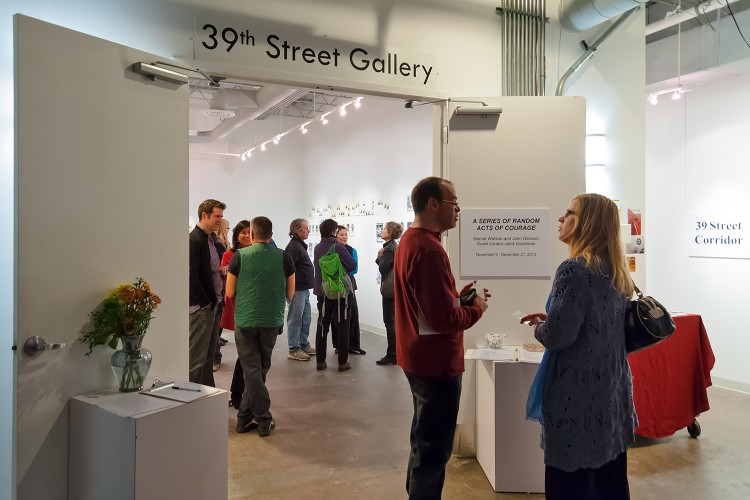 Genna Watson and John Dickson have known each other for a long time. They met over forty years ago while graduate students in the Master of Fine Arts program at Washington University in St. Louis.

In forty years John and Genna have always worked within reach of each other. They have taught together, exhibited together and share a home as a married couple. They have also individually developed their own unique language of style and grace.

It is not unusual for people in the arts to partner with another artist. The level of intimacy that develops while working together creates strong bonds, trust and understanding. In music one thinks of Lou Reed and Laurie Anderson and Johnny and June Cash. In cinema the long lasting couples of Susan Sarandon and Tim Robbins and Brad Pitt and Angela Jolie come to mind. The world of literature brought together Allen Ginsberg and Peter Orlovsky and Jean-Paul Satre and Simone de Beauvoir. The visual arts equally had such famous partnerships as Alfred Stieglitz and Georgia O’Keefe, Frieda Kahlo and Diego Rivera and Willem and Elaine de Kooning.

The interesting question for me is how do artist couples affect each other as professional artists? How does the deep level of intimacy in a partnership allow for honesty, growth and independence? This was not a dissertation but a curiosity that arose in preparation of the joint exhibition of Genna Watson and John Dickson and at the 39th Street Gallery in Brentwood, Maryland. 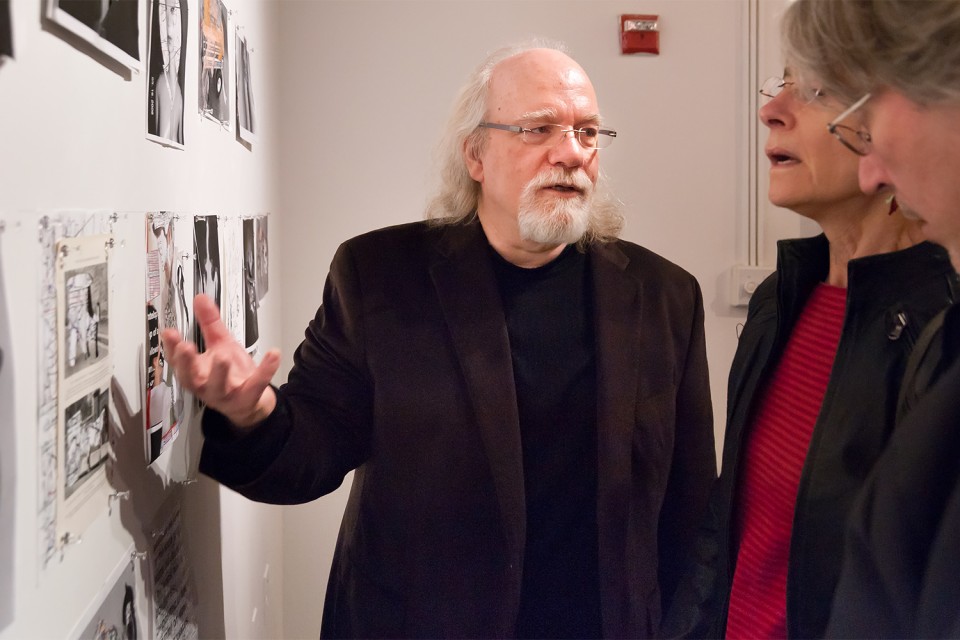 John for the last year has been harvesting imagery and information from random second hand books given to him as a gift by his sister-in-law. The books range from Japanese Akita to Women’s hairdos of the 60’s. Individual pages are removed from these books and used as a starting point for drawing, sorting and collaging. They are humorous, ironic, compelling and idiosyncratic. They are also studiously considered for content and aesthetics. Genna remarked that John’s current series was a “balance between what you change and what you leave…” When asked about his line quality John said,
“this mark making is not a pseudo language but an activity I have done since I was 6 years old. The lines are an act of presence and intensity.” 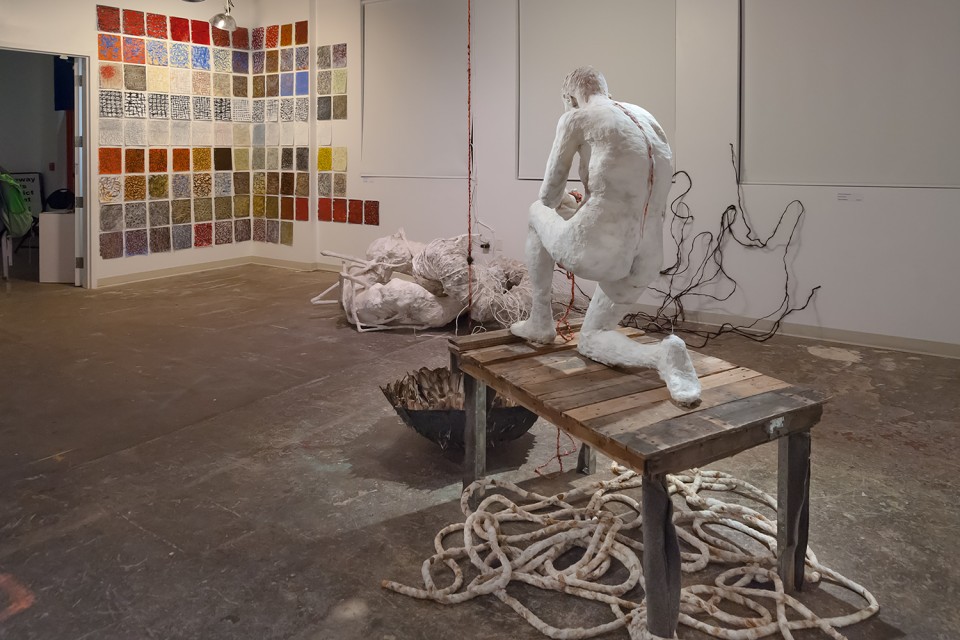 Genna chose for this exhibit pieces from her Intimate Attachment series. This series explores attachments made during one’s lifetime: psychological, physical and emotional. The sculptural installations (mixed media or hodge podge as Genna calls it) go through an elaborate process of construction, usually starting with a chicken wire armature that is then covered with burlap/cheese cloth, dipped in a glue and clay mixture and finally covered with cotton. Her work is a balancing act between the beautiful and the disturbing. They are personal and universal and represent a world filtered through a thoughtful eye and sensitive touch.

Genna has additionally included a series of acrylic paintings done on paper from spiral notebooks. These paintings are about variations and giving oneself rules and clear boundaries within to work. 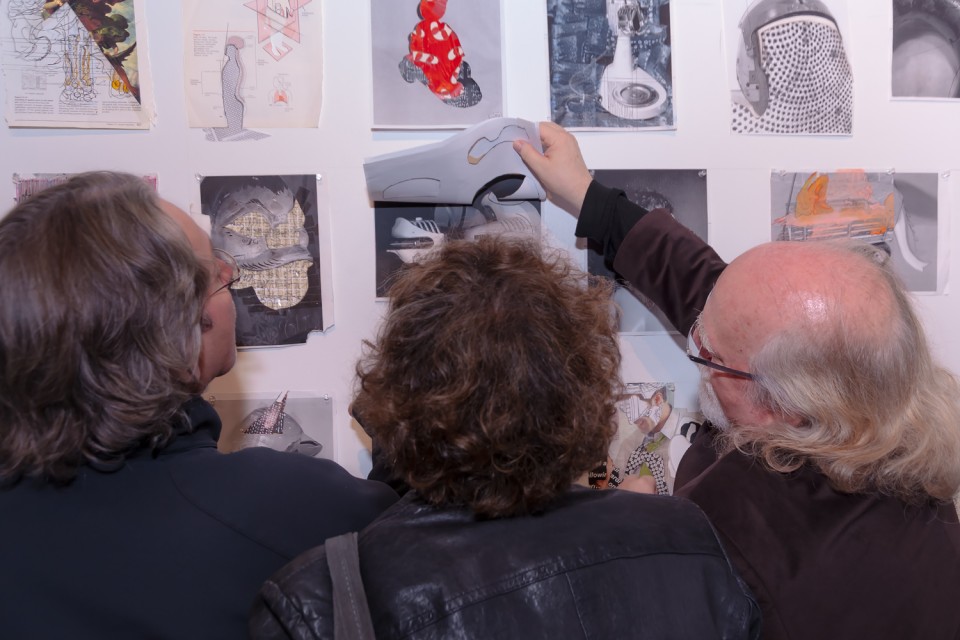 In conversation with Genna and John I learned some interesting facts. They have never collaborated on an art piece although they have often talked of doing so. They speak every morning of the work they did the previous night in their respective, adjacent studios in their home in Hyattsville. As John is no longer teaching at the Corcoran (but doing senior level administration) he explained that much of his work looks back through
history like an archaeologist. Genna, a professor at George Mason University continues to examine contemporary art.

Genna Watson and John Dickson demonstrate some clear parallels between their current work. They share certain directions and purposes. They both use fugitive materials that they view as rescuing. They are attentive to the physical presence of objects and things. They are both currently working with units of pages and paper. They both come out of a sculptural practice and their work is filled with a poetry that is often found and defined in ephemeral materials.
As professionals they pick and choose when it is appropriate to be critical of the other. They have the same issues around the limitations of time and resources. When asked if they were competitive with each other they said, “early on but not so much now.” They explained that they both have had public success but at different times. They also maintained separate gallery representation over the years.

Genna and John continue the tradition of artist couples that have merged their lives but not their individuality. Their shared home and interests are manifested in a series of random acts of courage as defined by this exhibition. John Dickson and Genna Watson do not finish each other’s sentences but they do talk the same language.